“Prior results do not guarantee a similar outcome.”

N.Y. CLS Jud §1200.6(a)1 forbids attorney use of false or deceptive advertising 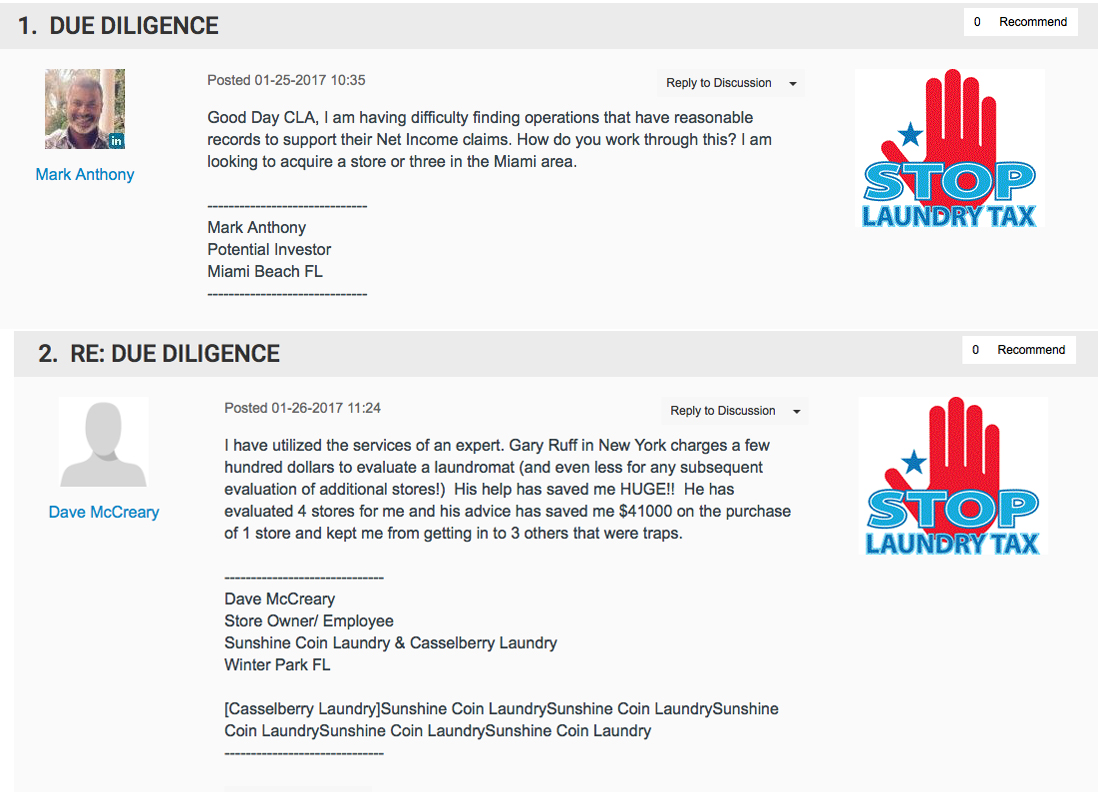 “I found Gary Ruff the way I suspect many of you did. I decided I wanted to get into the laundromat business and started Googling. Sooner or later I ended up on Gary’s website. Well my first reaction was “well this looks interesting” but it kind of all looked too good to be true. This guy was going to completely educate me to the ins and outs of the business all for a few hundred dollars and he was going to evaluate a purchase for me to boot. Frankly, I was suspicious (as we all should be when finding random consultants on the Internet). However, I saw that Gary was in good standing with the Better Business Bureau and had an office not so far from where I lived so I figured “what the heck”.

When I received Gary’s “Vital Info Pack” I read it cover to cover and some parts 3 times. It was amazing. Gary’s treatise give me an education of the pitfalls of purchasing a laundromat but went further and actually got into the nitty-gritty details of running the Laundromat, hiring, employee relations, customer relations and more. I was hooked.

When I thought I found I good prospect I quickly sent the specs over to Gary for evaluation. Boy was I in for a surprise. The Laundromat turned out to be totally misrepresenting their business and Gary just saved me a significant amount of money and grief. If this is where my experience with Gary ended it would have been well worth it but there is more.

The next laundromat I brought to Gary’s attention looked much better and so I decided to move forward. Now, I know quite a few lawyers and could have easily found someone to represent me in the purchase and lease negotiation. But, I was so impressed with what Gary brought to the table that I paid his retainer without hesitation. There began a 2-3 week adventure where Gary literally saved my butt. I won’t get into all the details but suffice it to say the landlord’s lawyer was asking to me to sign what Gary called a “feudal lease”. In fact, Gary told me, in no uncertain terms, that I absolutely should not sign the lease and in the first phone call pointed out several subtle landmines that had escaped me (and I read the lease at least twice). This continued through at least three or four drafts. Again and again, Gary came to my rescue not only as a lawyer but also as a coach in the subtle art of negotiation.

I now am the owner of the laundromat I wanted with the terms that at least give me a fighting chance to make it. The landromat business is far more complicated and difficult than it appears on the surface. Even with the help of good council, success is far from assured. There is one thing I do know … if I had not found Gary failure would have been assured. With Gary I feel like I have not only found the best laundromat consultant and lawyer I could have but also feel like I have found a new friend. Thanks for everything Gary!”

I’m just writing to thank you for all of your help re the purchase of the coin-laundry here in Toronto.

I closed the deal three weeks ago and the business is making tonnes of money! You were right on (if even a bit low) on your predictions on gross income – this you may remember would have been due to me not being able to provide historical temperature data re the natural gas.

You were also right on the money re fixing the machines as well a numerous other things.

I know this is going to sound like an infomercial but retaining you turned out to be the best $400 bucks I’ve ever spent!

I’m really enjoying the business and I’ve added an ATM, and a new snack vending machine will be here next week, all adding to the income. New paint, and updated floors on the way and then I’ll be raising the prices as they haven’t been raised in almost four years!

So, that’s it, just wanted to say thanks.

Excellent, I just received and only on page 4 and can tell this is exactly what I needed. I haven’t bought a laundry mat yet but have been offered the “opportunity”.

Look forward to finish reading and starting the analysis.

I am an aspiring coin laundry owner and in my research on the internet I found and purchased your “Laundromat Advisor”. I read through the entire packet and found it very informational, detailed and definitely answered a lot of questions for me.

I have not had a chance to say Thank You for your help. I realize that I did not accomplish my goal of purchase but if I had not listened to you I probably would have bought a Pink Elephant. Then I would have been strapped for the foreseeable future.

Again Thanks !!! I will be in touch in the future should I need your services.

Thanks for all the info, I must say that’s not the usual thing you find around the web. Very detailed information about the business inside out, very good!